Our French office in Saint-Hilaire had the pleasure to welcome our team pilot Agnès Gorgues and her friend Joffrey Maluski with a very nice project in mind.
These two young people from the Pyrenees practice the mountains in all their forms, push barriers and realize their dreams while warning about climate change. This time, their idea was to offer a moment of suspended poetry…

Agnès tells: “The idea took seed in my mind during the 2019 Christmas holidays when watching the film “Suspendu aux Nuages” mixing paragliding and aerial Circus in Martinique. The story of the film is magnificent, the paragliding sublimates the artists. I started wondering how it would be to perform aerial silks under a paraglider.

In March 2021, we managed to find a day to give it a try with a paraglider friend, Léo Malfuson. After a first short flight to the great despair of Léo, not succeeding in thermalling properly, the 2 following flights were rather conclusive. The cold froze my body but I was super excited to see that it could work.

At the end of July 2022, we finally managed to find a weather slot with Nicolas Cochet and Mathilde Chivet to immortalize the silks’ performance in a photo. After a first fail in Saint-Hilaire because of too demanding conditions, we decided to try from Chamrousse, an afternoon site, giving way to a beautiful restitution and an exceptional sunset with a view of the Vercors and the Chartreuse massifs. Joffrey Maluski and his camera in a tandem piloted by Lorris Bouniol, me in another tandem piloted by Nico Cochet and off we went for 50 minutes of flight including 40 in the silks, we had plenty of time to enjoy the landscape and to coordinate for the shots. After top landing, my legs were shaking with fatigue and emotion, tears in my eyes after such a perfect flight. It was time to join the whole team to realize how amazed everybody was after such a beautiful moment.” 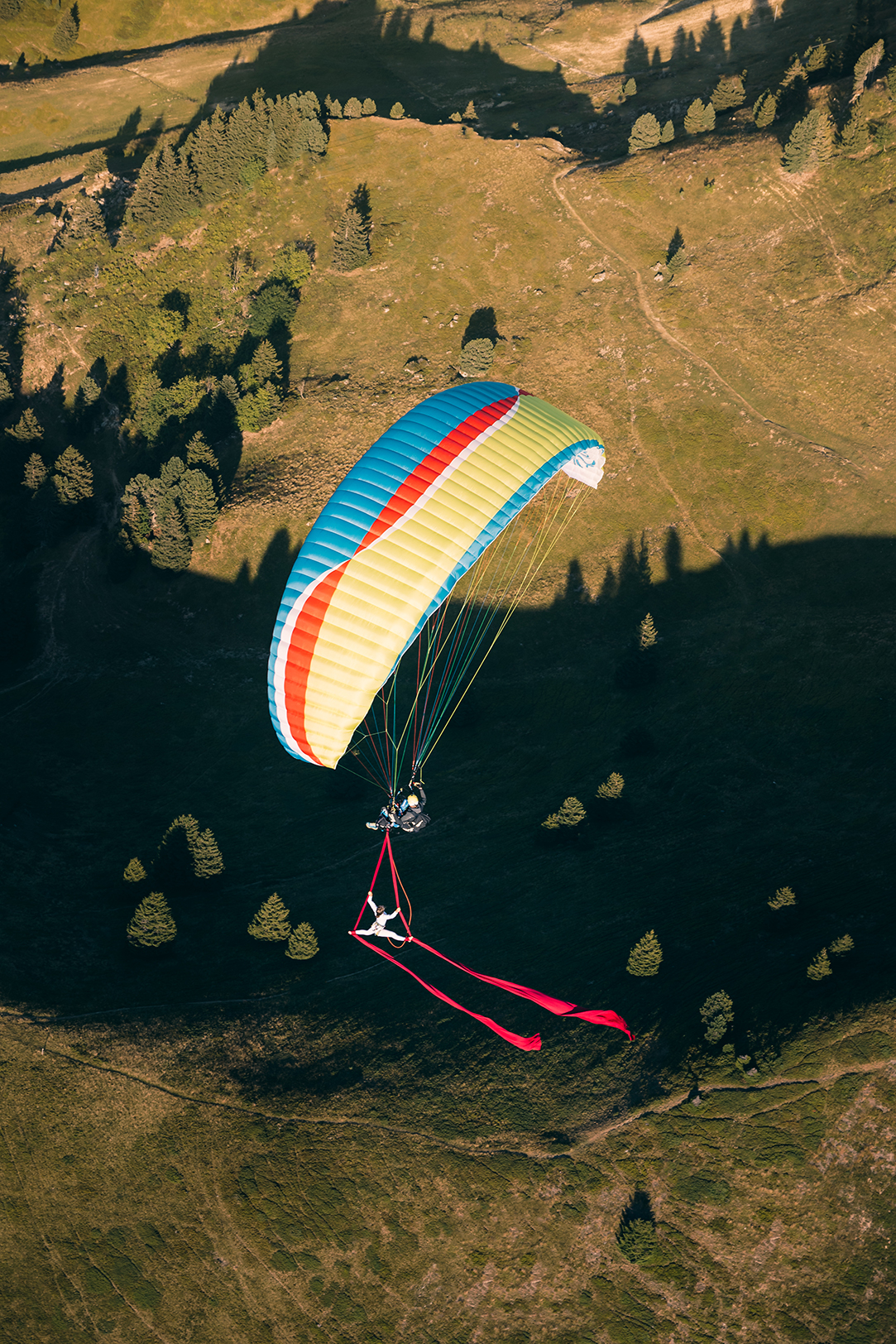 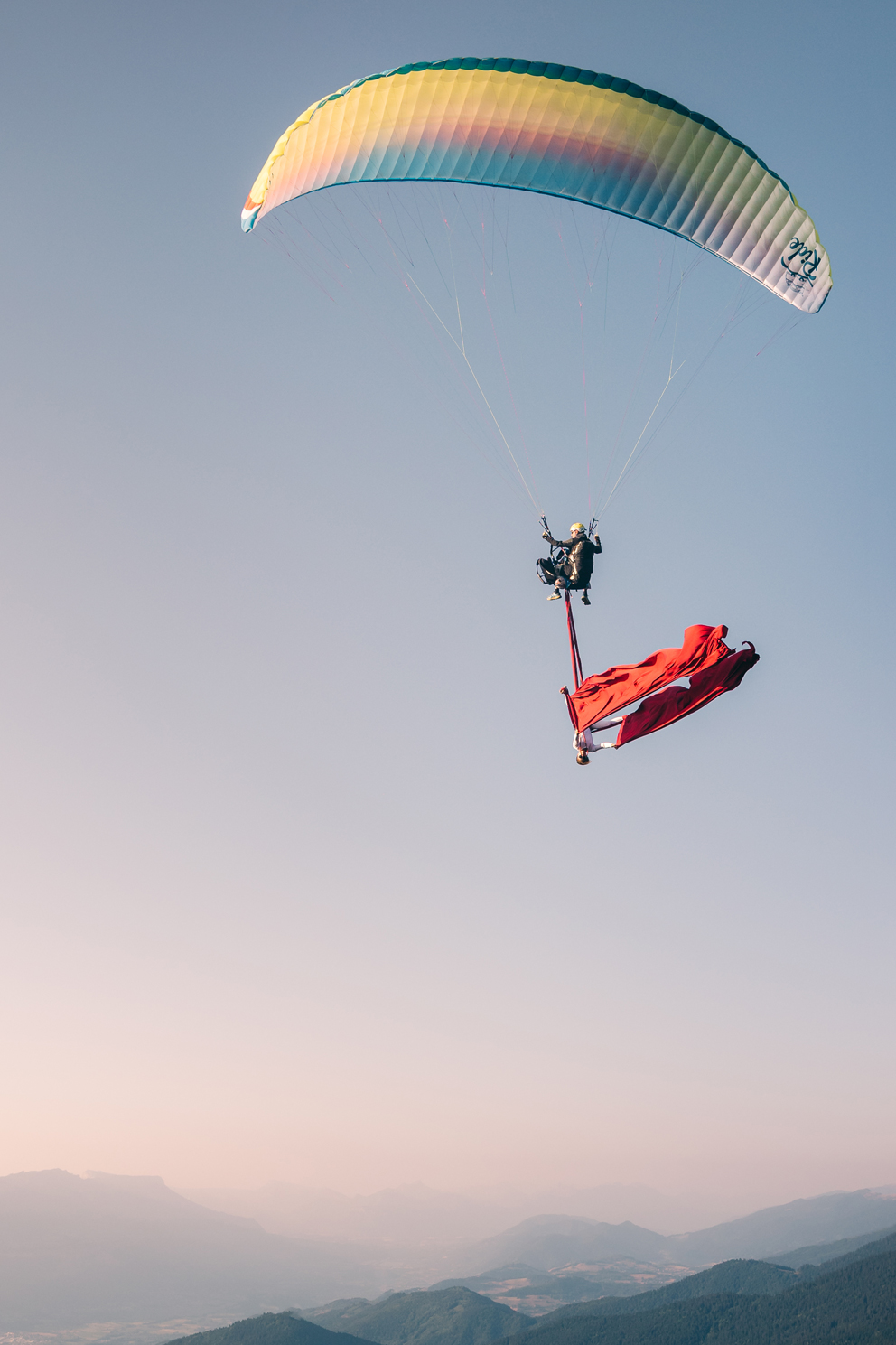 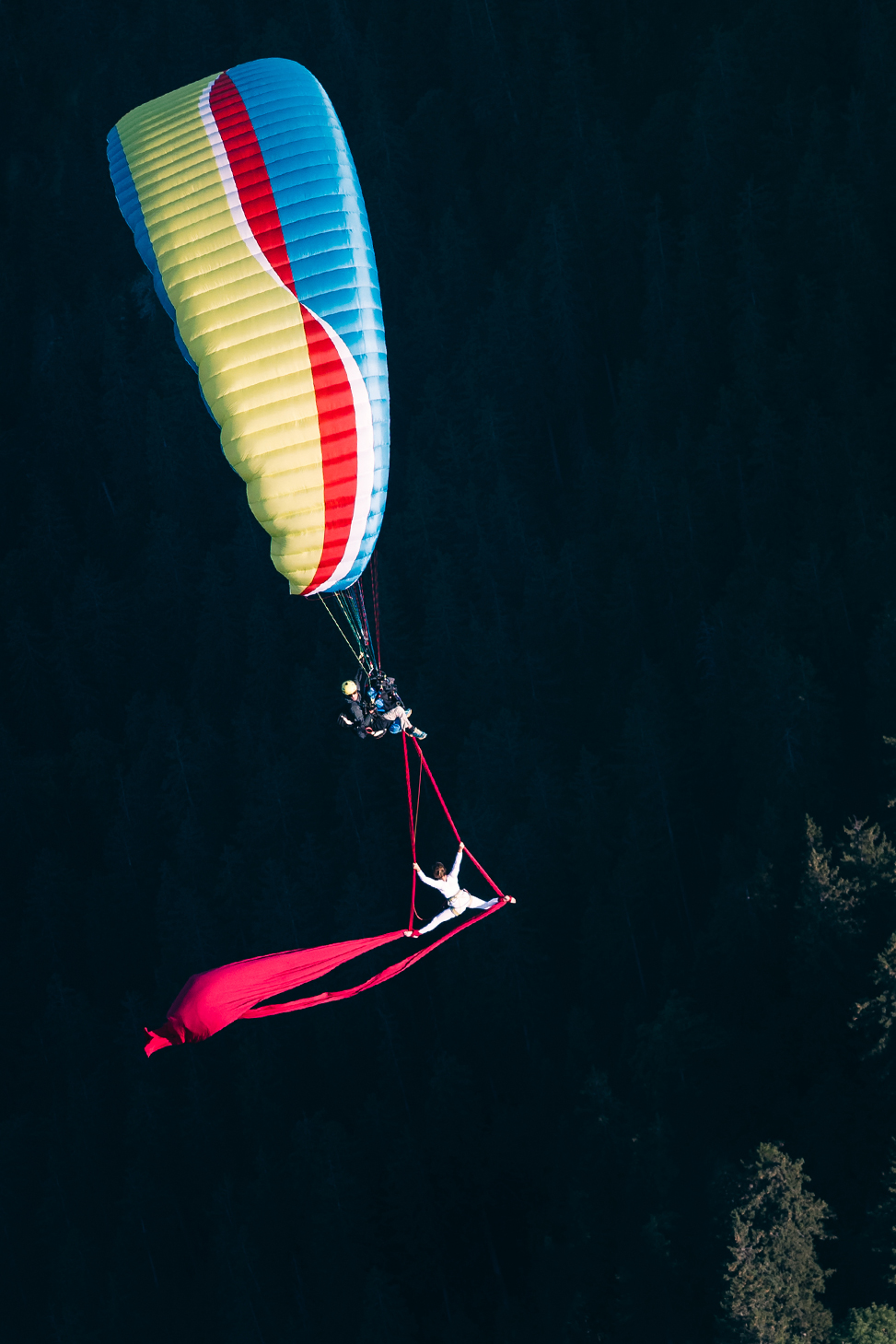 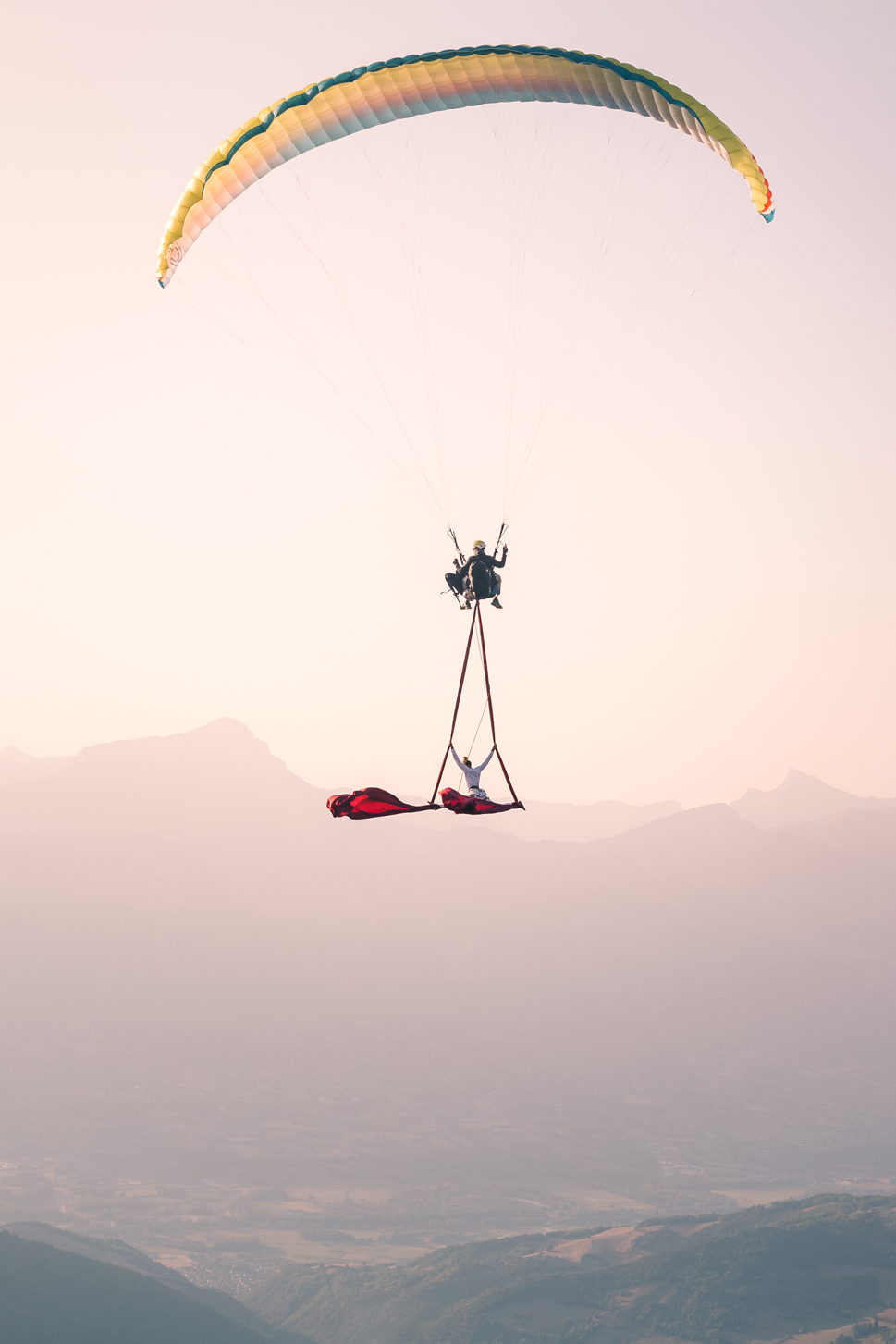 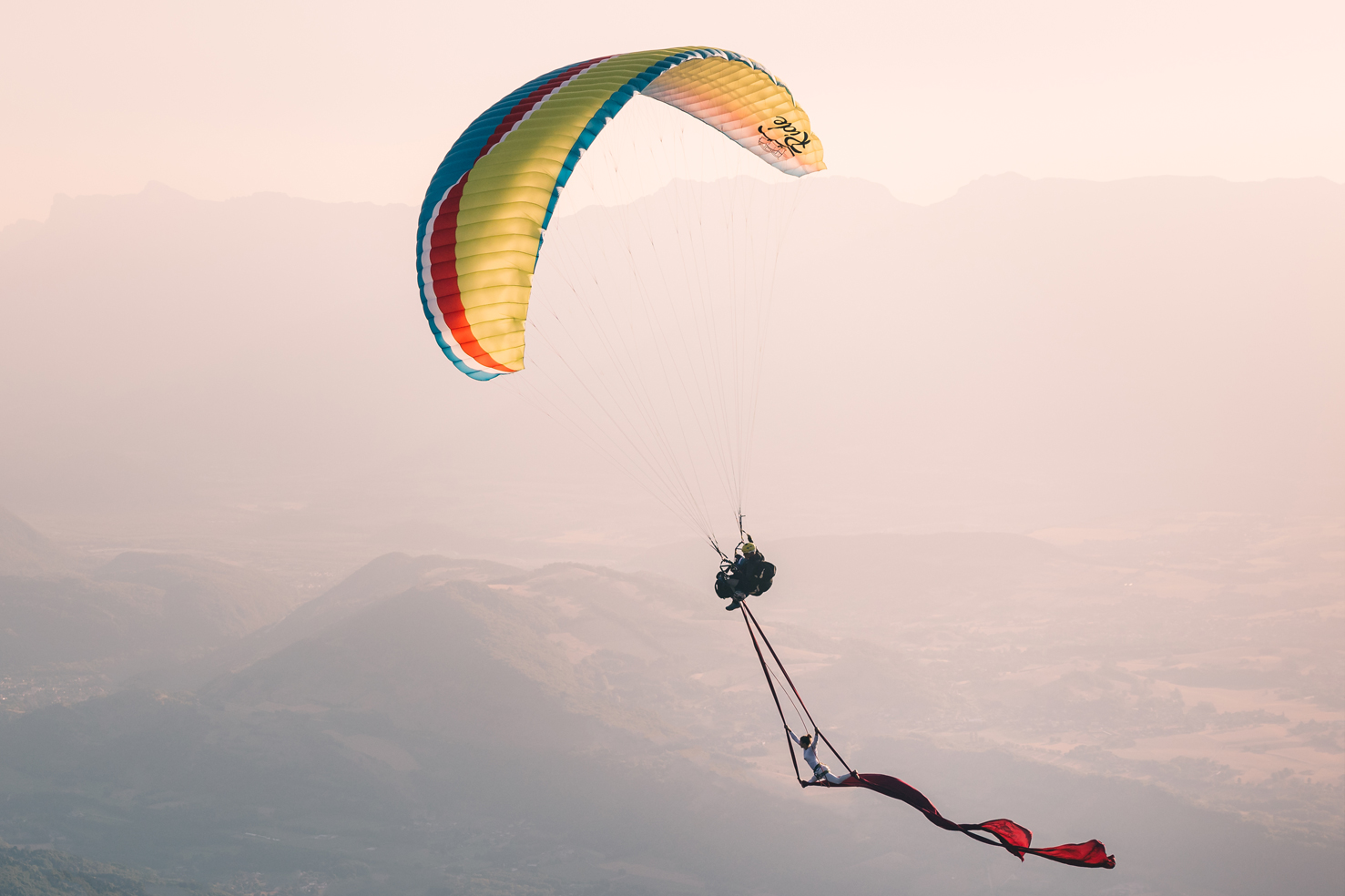 ← Flying from the Cerro Torre! With Pablo Pontoriero "Nevia": Sam Anthamatten in the spotlight →